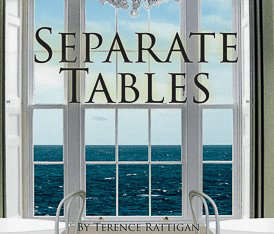 Separate Tables is the collective name of two one-act plays set in the 1950s, taking place in the Beauregard Private Hotel, Bournemouth, on the south coast of England. The first play, titled Table by the Window, focuses on the troubled relationship between a disgraced Labour politician and his ex-wife. The second play, Table Number Seven, is set about 18 months later, and deals with the touching friendship between a repressed spinster and Major Pollock, a kindly but bogus man posing as an upper-class retired army officer. The plays are about people who are driven by loneliness, but prefer human contact, however precarious, to isolation.
Written by Terrence Rattigan
Directed by Sandra Barfield

Performances every day at 7pm or 3pm from Saturday 9th  to Saturday 16th Oct.

More details for this venue

The event runs from 7:00pm to 10:05pm on the following dates.
Select a date to add this event to your calendar app.